What is a Hybrid Solar Power System?

Off-grid systems work independently of the grid but have batteries which can store the solar power generated by the system. The system usually consists of solar panels, battery, charge controller, grid box, inverter, mounting structure and balance of systems. The panels store enough sunlight during the day and use the excess power generated in the night.

It comes with the advantage of storing energy in the battery when the solar panel operates at its peak and retrieving the stored energy during peak evening hours when electricity rates are high or in case of any grid failure. Also, one can sell the surplus energy generated to the local grid-connection and get paid for the same.

Components of the hybrid solar system

A hybrid energy system combines the on-grid and off-grid components. The following components are used while installing the hybrid solar system at your home or a commercial location: 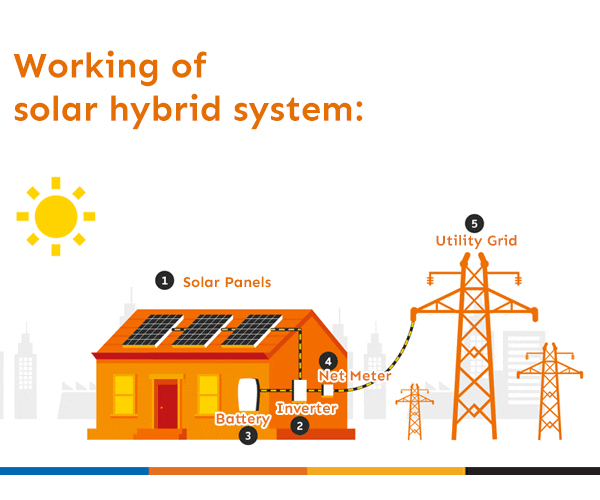 What happens when a power outage occurs?

What happens when a power outage occurs?

During daytime when the solar panel is in operation and suddenly if the grid failure occurs the solar power system won’t shut down. Instead, the system will isolate the grid supply and switch on to the battery system, it will retrieve the required power for all the appliances from the battery stored energy.

During the power outage, one must take care that the power consumed by all the appliances must be less than the inverter wattage.

Note: In a hybrid energy system when a solar panel is not capable of generating sufficient power during the cloudy day to cater power to all the loads, the system draws the power from the utility grid-connected and needs to pay only for that consumed electricity. In the event during sunny days when the solar panel produces more power than required by the load, the surplus power can be supplied to the utility grid and can get paid for the same.

Talk To Us, Today